Challenge #8 of the 10 Day You Challenge

I am chosing three movies that I love to watch, cry over and feel best represent me.

I was touched by this whimsical movie right from the first seconds. My husband took me to the theaters at Kendall Sq to watch a foreign film he thought I’d like. This was the first movie we went to after returning from our honeymoon in 2001!  And, boy, did I love this movie!

Amelie, the character, is so loveable and complicated (like most women at that age are), and Audrey Toutou who plays her is genius and beautiful (she is a great actress, but this was my first movie of hers).   Amelie’s journey through her life is neurotically quirky with regards to her upbringing and her relationship with her father, and the relationships she has with her coworkers and apartment neighbors is crazy and, in turn, hilarious. She is bold, shy and crazy, all wrapped in a cute French girl with a super cute hairstyle!

Also, she turns out to be very relatable.

My favorite part is how the story is strung together. How she turns all that is around her into finding true happiness, the type she deserves and the type that is unique.  The scavenger hunt of photos turns into meeting the love of her life which is so well written and perfect; I just love how this story is told.

I have a thing for romantic comedies, so you all are in the know.  Ahem, Harry Met Sally, still awesome after all this time!

Any movie I can laugh, cry and think about is perfect for me!

Also, I have a thing for foreign films.  I love them!!!

…and I might have to watch this tonight after thinking about it!

2. Eternal Sunshine of the Spotless Mind

Jim Carrey was so amazing in the Truman Show (fantastic movie!), which was a true shock to those of us who knew him as a slapstick comedian from TV and other movies.  So when this movie came out I was ripping at the seams to go see it. His brilliance portraying his character, Joel, as the so believable  heartbroken man over the break up of his girlfriend Clementine, who is played by Kate Winslet perfectly done. She is just brash and struck with contempt over a relationship that didn’t work out too well.  This couple is in the midst of a breakup and find that they would rather erase their memories of one another than deal with the pain of the breakup.  But what they come to realize is that they really never wanted to break up in the first place, cause they never gave it that true shot.  They were being selfish in the moment, and well, you know how relationships go.

It is a sad story when you see the core of their story. It leaves you feeling strangely empty yet rooting for this couple to make it.   This story was filmed in an interesting way too, with regards to the point of view. The current story is playing at the center of these sort of rash array of dreamy complicated memory snippets as they are being erased from their psyche.  The movie is just fantastically a mind fuck.

Ok, let me preempt this with I love Tim Burton films.  I am a huge fan of his*. I relate to his pov a lot.

My God the first time I watched Edward Scissorhands I left with mouth-gaping awe. I loved Edward.  I loved his innocence. I loved how the story was quirky yet beautiful with that strangely conventional imagery attached; it couldn’t of been portrayed better to make you feel whimsy in a dark place.  When the amazing actress, Dianne Wiest, appears at the gothic mansion where she ends up finding Edward is so staggeringly beautiful.  We see this giant abandoned structure amidst the most manicured yard ever seen.

The isolation portrayed in Edward is so spot on, actually in most of the characters really.  Edward may be, though, the most innocent character in a movie that I can think of. How he interacts with the sheer curiosity of the neighborhood/community, where Edward ends up, shows how innocent he is.  They push the notion that he is a novelty with their actions, because how they end up betraying him shows how he was actually an oddity in their eyes.     How quickly people can turn on a dime, right?  But Edward ends up very lucky to have fallen in love with a girl who helped save his life at the end, leaving him back at the gothic mansion where we found him. Safe.

The whole story is put together in a magical way. 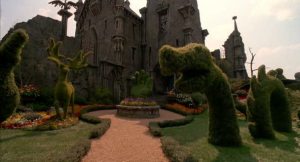 *Tim Burton’s art freaks me out, though, as I went to his MOMa exhibit a handful of years ago in NYC and was petrified to look at a lot of it. But to see his progression as a teen to an adult, incorporating his life experience out of living in Burbank CA in all the art forms, was pretty stellar. He truly is brilliant.

This was super hard because I love movies sooooo much!