Wow, it has been so long since I last posted on here, but I swear it felt like only a few days!  Woahhh time is flying wayyy too fast.

OK, so, I am just sooooo excited to update you on what has been going on..but I am splitting them out into two posts.

First, you guys missed out on hearing about my kids’ float parade!

It was so much easier to get it made than last year, because I had the girls sign up to make the float together.  Last year,  I had two sets of float teams, 15 kids total) at my house in one week making a huge mess and running around the house like rabid animals.. I was sooooooo not enthused last year. hah   This year, however, it was great, four kids one float..and we just happened to have a ton of the props from last year’s birthday still lingering around to make the magic happen.  We used the vintage luggage, the Hedwig in a cage, the fat lady painting, the broom and other fun stuff.  So. A few Wednesdays ago at the house, the girls, along with their friends, made a Harry Potter themed float.  They made banners, played on the swings, hung out, snacked, then watched Harry Potter and the Sorcerer’s Stone; it was so much fun.  I got to meet a new Mom, she hung out for an hour, and it was real pleasant to talk to her and get to know more about the town.  (Networking is so hard in this town for me, I am not sure why, but I am getting there!) Then one of the mom’s of my oldest daughter’s friend, who I am getting to know, hung out afterward for some wine and chitchat.  I like her a lot.

So, that following Friday, it was the big float parade at the school.  It was nice and early on a very gorgeous sunny day. The kids dressed in their costumes from the start of school; the three girls as Gryffindor students Harry, Hermione and Ginny, and their little guy friend as Voldemort.  The parade was so great! They had it outdoors this year, which was a first for me to experience, last two years it was inside the gym.  I got to talk to a lot of parents before it started, which was great, and, thankfully the people I am getting to know are so super nice and cool.   So many children participated; and wow, what creative kids!

Here are a few highlights of my kids with their friends and float:

Our youngest before school 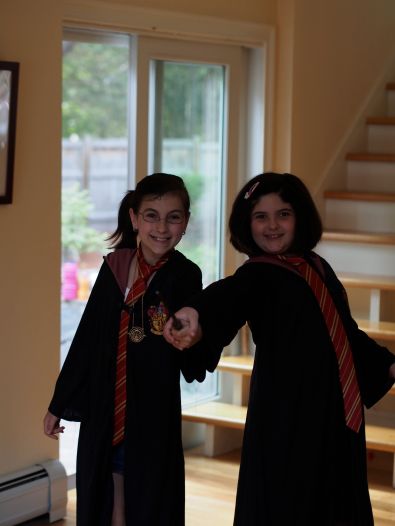 The girls never tire of dressing up.. ever

The crew with tHE HP float in the parade 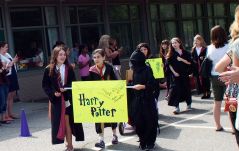 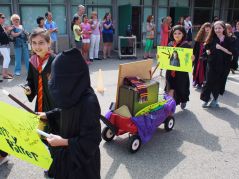 After the parade, i got the kids in some shots

they had a great time.

They also made the local paper!  Not only did they make it, but their closest friends who made floats did as well.  Check it out!

Ok…so next up is my favorite update of this month!!  Science Behind Pixar is officially open!!!!!