My husband had to be at the convention center at a decent hour, early but late enough to feel like he slept in.  He left me with a kiss on the forehead quietly, leaving me to sleep, and sleep I did!  I can party like a rockstar, I just can’t recover like one. By the time I got out of the room it was too late for breakfast, so I skipped coffee and took a walk to a place that I had wanted to check out, Lucy’s Retired Surfers Restaurant. It was just a block from the hotel, which was a perfect distance away as I was not feeling all that great.

Lucy’s is set up with a SoCal surfer bar theme with a California-Mexican menu.  Which is why I wanted to go check it out.  I LOVE MEXICAN FOOD! The cooking smells along my walk over were detected from the crosswalk, super good.  I walked in to find the place thumping; filled with lots of people, which was a bit much for my head at that moment, so I opted to be seated outside in the sunshine.  It wasn’t just quieter out there, but being in the warm sun was exactly what I needed to start to feel restored.  I wanted to eat chips -n- salsa and chug water, but thought I needed a more comforting feel for my empty belly.  So, I ordered a chicken quesadilla appetizer. While waiting for my meal, I decided to do more research of fun places to check out while I people watched.

When my appetizer arrived I was pretty surprised at how large it was.  And it being for just myself, it was a lot; especially, without my husband, the human garbage disposal. haha   MY LORD.  It was the best quesadilla that I have ever had. THE BEST.  The ingredients were super fresh.  The combination of cheeses all melted together with the crispy grilled, yet juicy, marinated chicken made me so happy. Yummm, it was just a joy to eat all of the gooeyness. With the first bite I started to feel a lot better. Sometimes you need greasy foods to get over a hangover. Yes, I was pretty hung, kids. hahah I ended up sitting there for a while, enjoying the sights while putting a big dent in that meal.

I had planned on going for a walk around the area after eating, but as soon as I paid for the bill, I decided that going back to the room was probably best. I felt like I needed water and rest.

Trying to be colorful in the Big Easy!

THE BEST chicken quesadilla I have ever had

Before I knew it, I was in our room passed out. Yes, I napped. I woke up feeling amazing, though!  I jumped up out of bed and started to get ready for our night out.  My husband happened to call just as I was pulling my clothes together to let me know that he was leaving the convention center, walking back to the hotel.  He was so happy to hear that I was feeling well, and that I napped.  I don’t normally nap.

Our plan for the night was to attend the closing celebrations for the convention, which started at the National World War II Museum then moved to Ogden Museum then the Contemporary Art Center.  All in one block radius.  Before heading to the celebrations we were meeting up with a friend of his for dinner, it was one of his colleagues and my best pal from the night before. haha

My husband and I headed down to meet up with our friend to eat near the museum in the Warehouse District at Cochon Butcher, which is known for great local food. And guess what? It was sofahking good!!  The place is inspired by a butcher shop, has a bar, and decked out in Star Wars and comic book memorabilia.  Super fun aesthetic to the place.  The food smells great inside. It is a very low-key order and sit, cafeteria style, place. We ordered drinks, a beer for our friend, a Kiss from a Rose for me, and an artisan cherry cola for my husband. My husband and friend both got the beer beef with mac n cheese and I got a BLT, of course.  I will never pass up a BLT, and, definitely never from a place like Cochon Butcher!!  Everything was delicious. My husband’s dish was cooked perfectly and was so comforting. The bacon in my sandwich was that thick cut savory goodness we all dream of. Like I am dreaming of now.

READY FOR THE NIGHT! 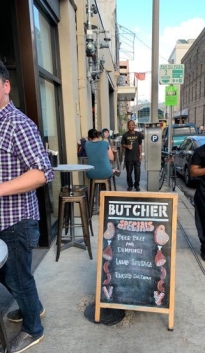 Kiss from a Rose- Butcher Cochon 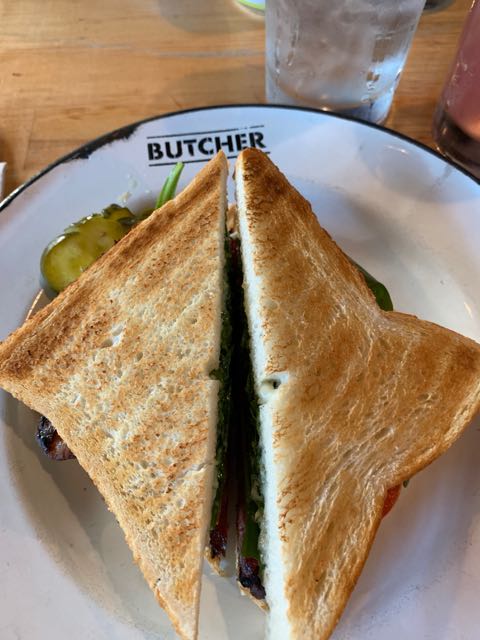 Butcher Cochon- BLT for me 🙂

After downing all the goodness and gossiping about all the debauchery from the night before, we took off on foot for the museum. It was a quick ten minute walk over, which we all needed. We got to the rockin’ location happy and full. The place was a buzz of museum people outside. The whole venue was lit up and most of the party was held outside.

We had a quick drink as we grabbed tickets to see their 4D show, Beyond All Boundaries, for 8:30PM.  Since we had some time, we started to make our way through the exhibit halls by way of the Road to Berlin then Road to Tokyo.  It was pretty visually, a beautiful exhibit space. The stories they told were through America’s eyes, and each soldier they highlighted had such compelling stories.

As we left the building to head outside to grab a drink, we saw another person from our bar hopping the night before. She also grabbed tickets for the same time, so she tagged along with us to see the 4D show.  The show was about 48 minutes long, it starts in one space then goes into a theater. It highlights the war narrated by Tom Hanks’ voice, which I loved.  The show itself could lean to hokey for some, but it was fun for me.  I loved the surprise elements and the stories they shared.  It was like a visual media extension of the two exhibits we walked through; I don’t want to spoil it for anyone, because they really did make an impact with the story telling.

After the show we walked through the store, which had some fun products.  Then we made our way over to the party across the way inside the main building, the Louisiana Memorial Pavilion, where all the food was set up.  The space was beautiful!  Hanging from the ceiling was a c-47 aircraft and a Higgins Boat in the corner across from a mock train that I didn’t have time to see.  There was a fun trio, The Victory Belles, who sang war time songs in flashy vintage military inspired costumes.  They sang musical hits like Boogie Woogie Bugle Boy, God Bless America, and then at the end they sang a Service Medley that a lot of people in the audience seemed to like.  While we watched the show, we grabbed some bananas foster that was served with cheesecake.  Bananas foster originated in New Orleans, and is a must eat.

We had a fun night! 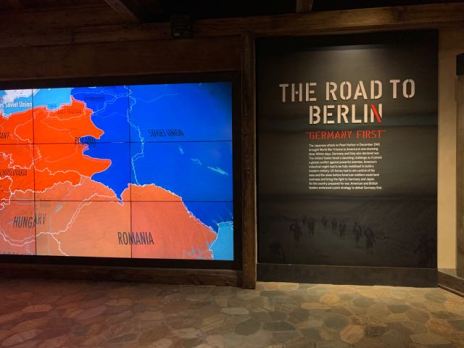 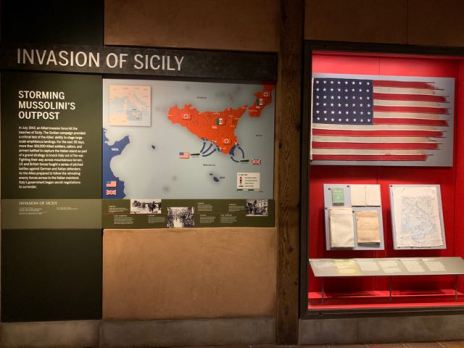 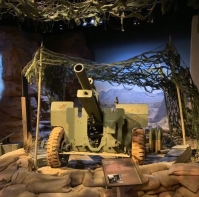 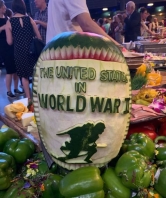 huh, i took this while my husband was talking in the background? i don’t remember that! haha

Between sets, my husband talked with a lot of people.  I did as well, which was nice.  A lot of the people I had been meeting brought their significant others or were chatty themselves.  We stayed at the party till it closed out talking to one of the people that worked for that design firm from the first night.

We never made it to the other celebration venues, but my husband felt like it was not a big deal as so many folks were at the WWII museum. We left there to beautiful bright night skies.

It was a really good day!