Wait, it’s Tuesday already? Wow, this snow is confusing me this week because it is flying.

Ok so,  I am continuing on my diary with our next stop in Mexico; one of two stops in this country. This was my first time visiting Mexico, but my husband’s second time..so much fun!!  We had booked a tour previously, with a tour company affiliated with our cruise, to see the Mayan ruins of the area. What an experience.

March 24– This morning flew by eating a quick, as healthy as possible, bite at the buffet, grabbing our gear and heading to the kids’ events they had going on in the piazza.  This was the first day they dedicated the public space to a specific event for the kids. They had tattoos, button making and cookie decorating.  Then right before it was over they had the mascot visit with the children.   Our tour was for 12:30, and at noon we were able to disembark from the Regal Princess in Mahahual/ Costa Maya, Mexico.   It was a hot 85F, which meant I was a smiling, happy girl.  This girl can get used to that weather!

Once we got off the boat, we made our way to the port entrance lines where our tour was awaiting on the other side.  We shuffled aboard the bus, on what was later coined as “Reggie’s Tour”. Our tour guide’s name was Reggiano, and he was a funny little character. We took an hours drive through the small town and into the jungle of Mahahual to see Chacchoben (Mayan Ruins) all while Reggie talked about the Mayan and Mexican people, and the landscape.

Chacchoben is one of the most different places I have been, historically, in North America..and I have been to a lot of places.  But this area reminded me of the Valley of the Temples in my parents’ hometown in Sicily.  This hidden niche of major history scattered around a large area of land. This place was just amazing and so rich with sights, and history.  Some of the earliest history can be recorded from 3000 years ago!  And the kicker is, that it was all constructed in alignment with the stars, Orion’s Belt, to be exact.

There were two parts of the tour that struck me a lot, made me think.

One was a weird fact bit of info that the tour guide passed to us about the Mayan ritual during the Day of the Dead…which some of the people still perform today.  Most of you know that I love All Saints Day/Day of the Dead, everything about the idea of celebrating the dead intrigues me.  So, their burials grounds are not like the America’s, they are not underground, but in individual cases alone or in grouped in drawers within a larger, what I call, apartment of shelves in a building type burial, or in mausoleums.  Actually, when you leave America, you will see most cemeteries are not with burials underground.  So, the Mayans on the Day of the Dead, take the bones of their ancestors out of their cases and wash them.

Then drink the water.

Then the second thing that struck me was that at the sight of the ruins they were set up in three..there was one ruin that was below, which had a mural that was now covered to preserve it.  Then as you walked away from it to go up to the next level, there were these stairs that had an odd oval-shaped rock placed upon one step. Not in the middle, not at the top, not at the bottom, but about 3/4 of the way up.  The rock on the step had a hole cut out.  But when you looked within the hole it was not straight but curved.  The main ruin above, on the next level, was the main place of worship and where the reigning queen and king would speak and perform rituals with the high priests.  This large temple had an interesting shape at the top, where it aligned with the sun every morning.  When the sun shone through the central part, it reflected to that rock on the stairs.  The sun’s rays would shine through the curved hole to light up hundreds of yards away to the first ruin to shine on a mural!!

Amazing!  What engineering from before Christ!!!!

Before dismbarking, they had a kids craft session in the piazza

At the entrance of the port

With the dressed up “Mayans” 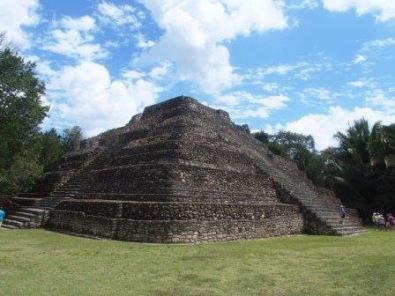 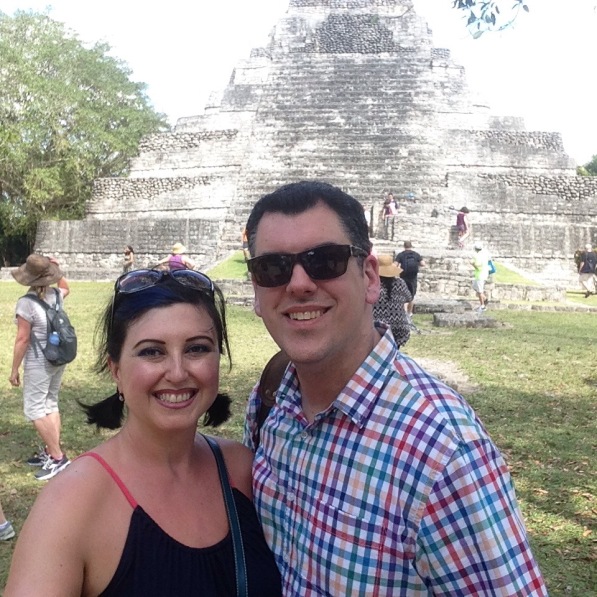 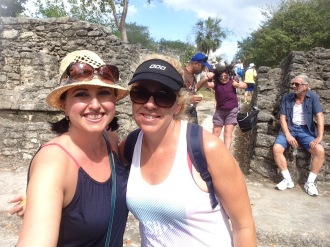 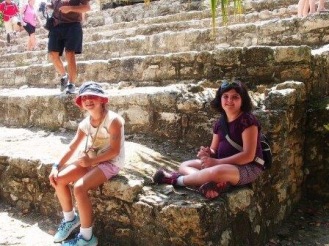 There were these gnarly trees, that were ancient. 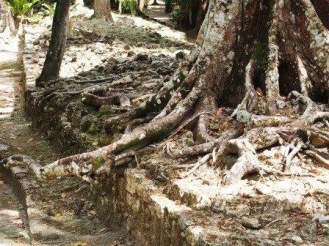 Super cool roots spilling out over everything.

Then we saw a monkey!

After our tour, we headed back to the boat to get ready for the night’s events.  The guys took the kids out for a quick bite to eat then dropped them off to kids’ club, since we would be spending an adults night out.. FINALLY!

Tonight we made reservations for the four of us to dine at the Chef’s Table Lumiere at 6:30PM. This was not part of the cruise package, and cost $115 pp. This included food and drinks.  This truly is a once in a lifetime experience. This was a back of the house tour along the galley with a special dining experience lead by the executive chef, Naveen Quadros,  and maitre d’hotel, Francisco Patricio.

We kicked off the night putting on the kitchen’s white coats with 7 other guests for the evening.  We looked so much like doctors, it was hilarious.  So much so, that when we went through one of the main dining rooms towards the kitchen I overheard someone say, “oh there must be a doctor’s convention”…uhm yeah, sure.  haha  We were led into the kitchen.  Wow, that is all I can say.  The executive chef and maitre d’hotel walked us through each station, explaining how they are able to put together so much food a day. The kitchen was meticulous, and run with military precision.  Truly spectacular.  Once we turned the corner at the end of the galley, we found a large corner decorated just for us with carved fruits and veg with white linen dressed tables.

We were greeted with a champagne toast and then a walk through of about 5 hors d’oeuvres followed.  Some spectacular things like:

*drool*  I was all set at this point, but it wasn’t over!

Then we were led to the Lumiere dining room where they had a truly special chef’s table.  The table was in set in the middle back of the restaurant, inside a giant circular pagoda.  Then as we were seated, a giant sparkling Swarovski privacy curtain swirled encompassing us and then another one that was more static dropped from the ceiling around us.  It was beautiful in person.  The table was inlaid with pearl, and the centerpiece was a large mass of a sculpture made of Murano glass from Venice.  So sparkly.

We were given a wonderful glass of wine from France and our first course… yes, more food!  We were presented with an asparagus risotto topped with a giant Maine lobster tail all inside a Parmigiano Reggiano basket.  So delicious.  This was then followed by a palate cleansing by a roasted orange and crystallized ginger sorbet topped with a cookie and drowned in Grey Goose Vodka.  It was too pretty to eat!  Then they opened a part of the curtain where they showcased the chef cooking table side for us.    He was cooking and flambeing a lamb rack and beef tenderloin, all carved in front of us, then presented with the cutest mushroom-shaped potatoes and root vegetables.  This was paired with an Amarone from Italy… gah it was the perfect pairing.  Then they brought us a cheese plate that I wasn’t gaga for, but it was a baked Camembert de Meaux with pine nuts, a port wine reduction with walnut and fig breads.  Then they brought out a type of ice wine, a late harvest Sauv Blanc from Chile…yes, it was amazing.  Then we topped off the night by being served a chocolate mousse with caramel cream and milk choc crunch.

It was as delightful and filling as you would think!  We were given photos that were taken when we were seated, a culinary journeys cookbook, a flower and a copy of the menu. Thus my details! hah

The whole evening was wonderful, but we had to jet off before 10PM to grab the kids. 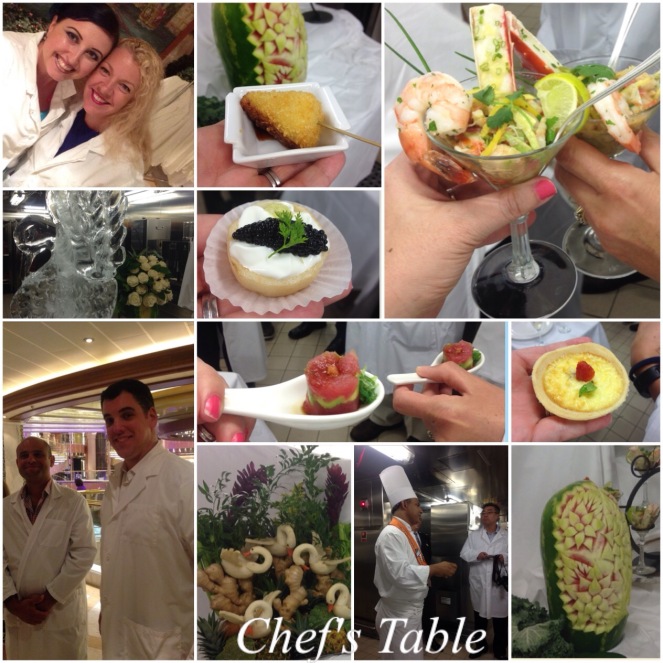 These were all the pics taken of the apps before the meal. AMAZEFACE!!

The chef’s table for the tasting. You can see the curtains swagged to the sides. 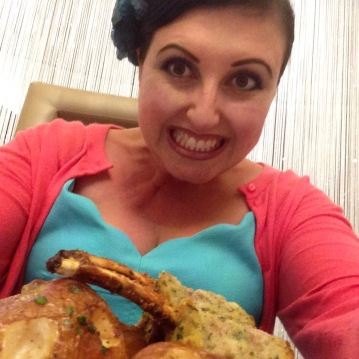 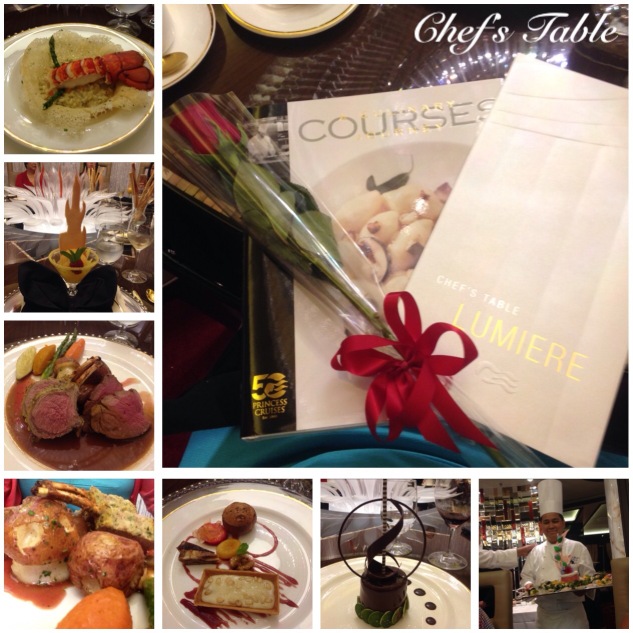 All the food we ate at the table… *stuffed* 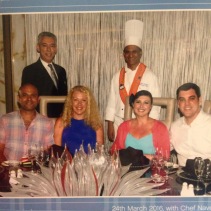 The photo of us four..they also took a table shot of the whole eleven. 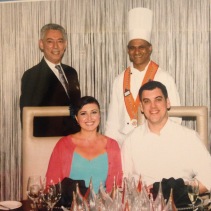 The photo of us

The kids had a wonderful time in kids club making crafts and playing games.  I gave their caretaker my rose, because, well, what the hell was I supposed to do with that! hah (yup I am Elaine Benis)   We went up to the lido deck for a walk around, but to our surprise there was a big dance party happening.  We didn’t go dance on the deck, but it was a fun time being up there with the kids and the music and the warm breezes.  Then we went off to bed!