The big Disney trip reveal is only 15 days away!
(and the best day of the year is only 4 ! heh)

Found this DIY shirt on pinterest a few months back, and have been itching at giving it a try.
What you’ll need:
plain t-shirt
buttons, at least 40 buttons
a Mickey Mouse head image printed on a piece of paper
craft glue (water soluble)
needle and a thread that matches the buttons

Shown here are two t-shirts I had made for both my children today; purple for my oldest and pink for my youngest. I will probably also make one for me from an old t-shirt I have using white/mother of pearl buttons, but I won’t have time till after the New Year.

The Mickey Head T-shirts were a huge success!

We just returned from Disney, and the girls loved wearing the Mickey Head t-shirts, just as much as the crowds at the park.  I got asked at least every ten minutes where we got them, and I was so proud to say Mrs. Claus ;).

Here are a couple of shots of them in their tees, and one with me in the one I made for myself. 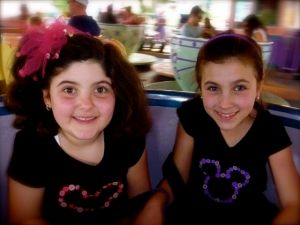 I own a million tank tops …and buttons.  For this, I chose a tank that was fairly new, bright, and that I didn’t mind having the buttons sewed onto.  Also, a tank I’d not miss wearing so often (for just when we go to Disney).   Hope you try making these! Happy Sewing!