Here we are on our real first day out in Tokyo, but day two of our total journey.  We did so much on this day, that this post is extra long but rich with photos.

Since I passed out so early the night before, and I’m so happy I did, I was ready to go at 5AM, but I held myself back from getting out of bed until 7AM, because my husband was still sleeping and I didn’t want to wake him up.  This gave me a lot of time to check messages, news, and text the kids.  Once my husband got up, we got ourselves ready for a big day out in Tokyo.  Our plans were to hit the fish market area and just wander around trying to hit the places we didn’t get a chance to see in 2004.

First, let me mention that the hotel gave us a free mobile phone to use that had free wifi and calling across the globe, so we were able to navigate properly everywhere we went through Google.

We started by grabbing some breakfast in Shinjuku near the station.  We grabbed a quick bite to eat and then hit the trains! 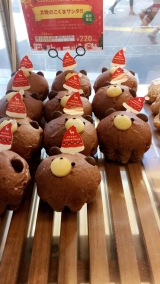 First stop was to eat..found this cute bakery but they didnt have coffee! so we grabbed some food and trekked on

Then we found Dean and Deluca! CRAZZZZZZY how much food is in this photo in person 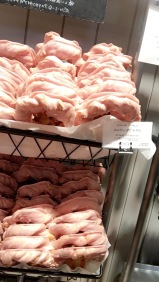 I wish I had a sweet tooth cuz these looked amazing. Oreo Muffins at Dean and Deluca Shinjuku Tokyo Japan

First latte of the trip! It was so pretty from Dean and Deluca

Ok, so the train system in Tokyo is a web of so many lines that even if it were in English it would still be hard to maneuver, but in Japanese it is like staring at artwork rather than a train system! And it is an art to get tickets and figure out where the trains actually are!!  Let me explain:

There is an e-card pass system called SUICA to use the transit system (some taxis, vending machines and stores).  It is pay as you go; you put money on the card and it withdraws at every entrance / exit gate.  It is real easy to use.  You touch the card to the turnstile SUICA pad, it pops up with the amount on your card and how much the entrance fee is. When you leave you repeat touch the turnstile with the card and it pops up with how much is on the card and how much the distance fare is. The cards are refillable anytime, and can be done through these kiosks below.  We were advised to purchase a SUICA card with 2000Yen on each card (around $20 USD each). We ended up using it for multiple train rides and even on our last day to pay towards taxi service. 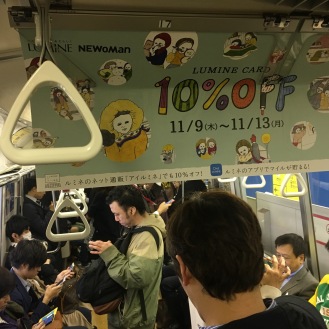 signage on the trains everywhere, even covering the ceilings making it hard for us tall people to stand.. my husband is crouched down like four inches!

They didn’t have this system in place when we were there in 2004.  The card system made using the subway a lot easier without paper tickets to carry just a credit card type prox card like at home/and in NYC.  The fun part was figuring out that they had this system and acquiring a card!!  hahah Oh the Lost in Translation moments.

My husband is great at navigating around places, even if he doesn’t speak the language.  He knows where to go and just figures it out.  Traveling with this guy is a great thing!  Our first stop was the Tsukiji Nippon fish market.  We took the train straight there, walked down this little incline that opened up to this massive street where there were a handful of alley ways with hundreds of vendors selling food from sushi to dumplings to full restaurants and some stores that only sold cooking items.

Some things that struck me right off the bat… There was no smell in the air of fish or that you were even near the fish market area.  There were hundreds of people working or walking around/eating, yet it was organized.  Not one barrel around, but it was clean!! Also, that people came from all over the area to eat.  It was a pretty great experience and I ate some street food from places I would never dream to eat from.  A definite happy stop on the trip. 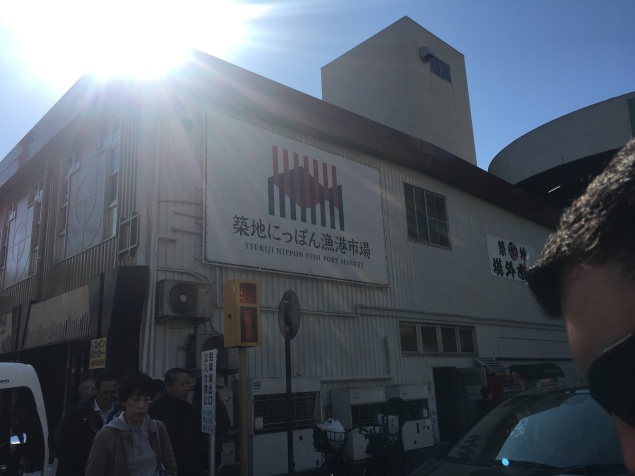 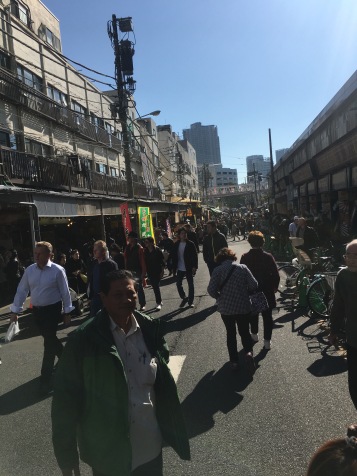 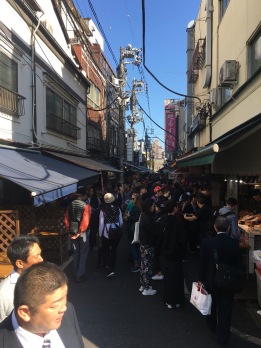 The crowds of people everywhere is magnificent. 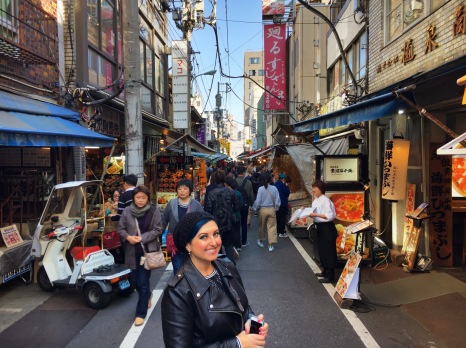 Even their sewer covers were beautiful 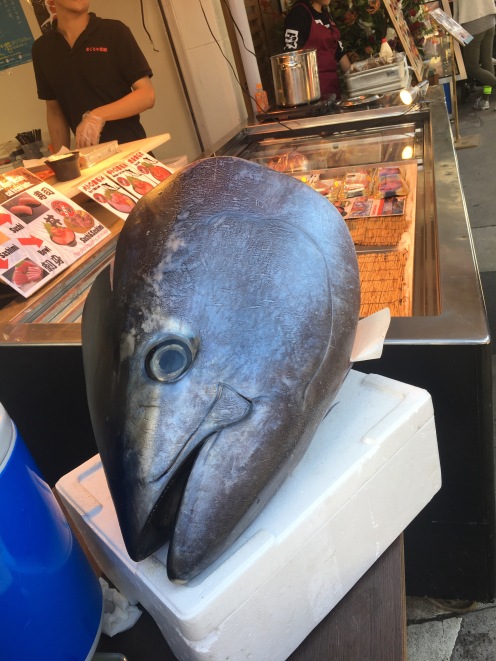 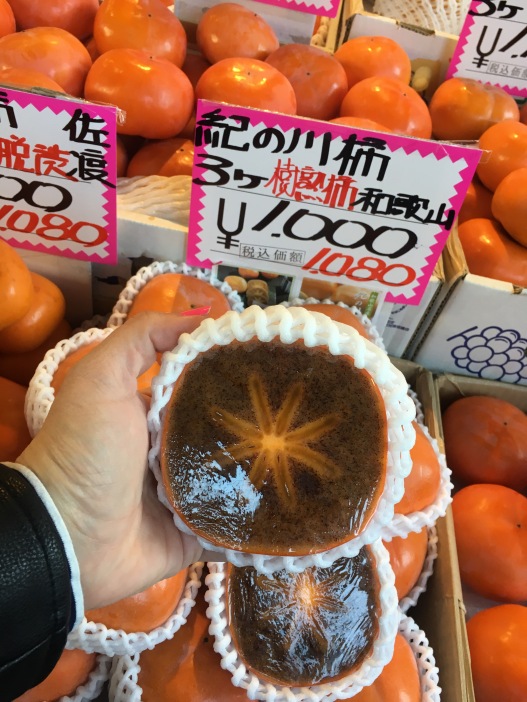 This was the best dumplings. Street food usually is. Here is chicken and pork shumai (I love shumai) and pork sticky buns. SO GOODNESS EVERYWHERE. haha I was in heaven 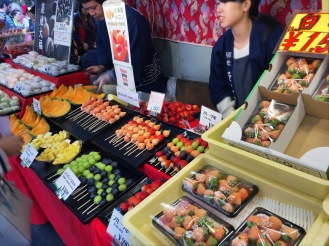 Ever hear of that elite Japanese fruit, like the Yubari melon? There it is..and it was SICK good! Also the strawberries were the best I have ever had! 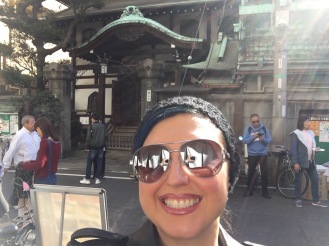 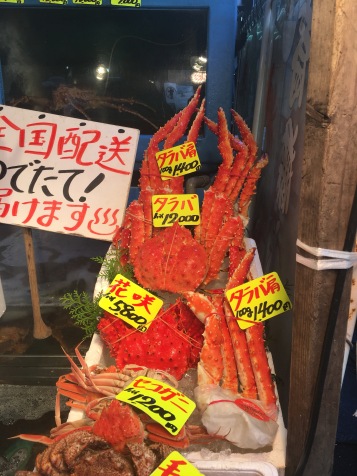 dried octopus, but i loved the packaging so much! cute! tho eww! haha

After the market we decided to walk through to the Ginza district, which we had visited in 2004, but man, I didn’t recognize it! The Asahi Beer Hall fashioned after a German beer hall, which we loved, was no longer in the district, which was a bummer.  We had such good memories of that place.  Everything just seemed so much larger, so many more people, and just so much more to see.

Our first stop was to the department store Mistukoshi. This department store is one of the largest chains in the country.  Now I know it sounds bizarre, specifically going to a department store in Tokyo, and we visited many this trip, because these stores are like a whole experience that only you would get in Japan.  I have been to some elite department stores in various cities, like Harrod’s in London, Bloomingdales in Beverly Hills, Bergdorf Goodman’s and Saks in NYC, and obviously all those throughout Boston, but let me say they have nothing in comparison to these in Japan. Nothing.  The elegance and refinement of these stores, just at the top of the list of class. Also, the employees working the areas are like old world humble salespeople from a time lost a long time ago.  They care about you, like really they care about you!  You feel like you are somewhere really special.

I have found that the Tokyo department stores are usually somewhere around 8 floors high, and each floor is as big as the next, with furnishings from the elite to the local.  But the best parts are the basement levels..well, if you are a foodie.  They have these food bizarre type levels that just knock your expectations out of the park.  The food is everywhere, fresh, delicious, colorful, and just in a word AMAZING.  This was the first department store we visited this week, and I left in shock and awe at what I saw.

Every sewer cover was beautiful

Walking the street there was this vendor with chestnuts roasting with coal..it was super cool and smelled so interesting. I love chestnuts

vending machines are their thing… those labeled in red come out hot.

We happened upon this Nissan show room that featured this cool new car of the future.

A florist on the street making flower trees.. the color was magnificent 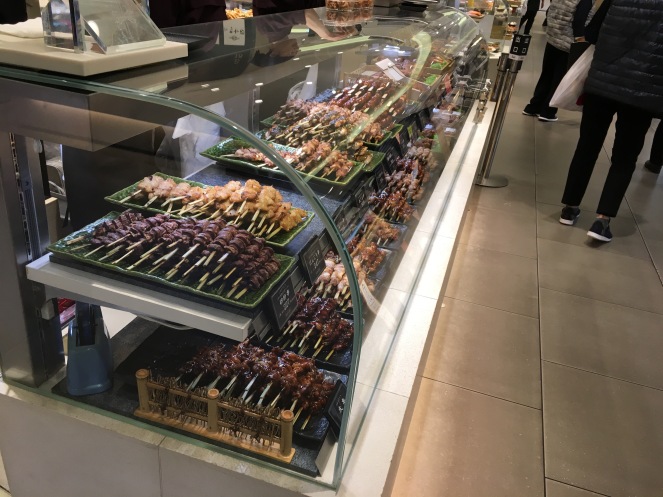 the amt of food was frightening. 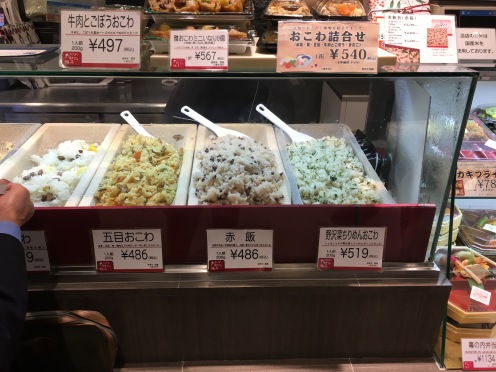 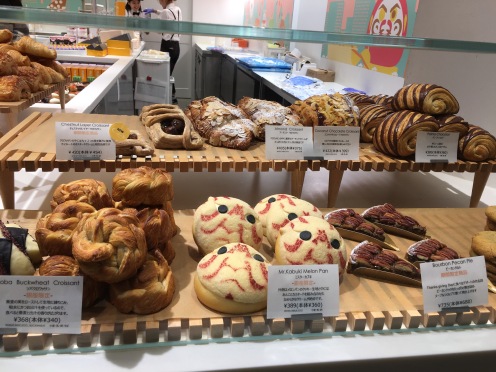 First Starbucks of the trip!

the first time I went to a starbucks in Tokyo 2004, the girls at the counter sang to me my order. it was like a sirens call of these cute Japanese girls, they giggled, made me giggle, and it left such an impression… this time it was all business, no singing :(((

The starbucks was so pretty

After the department store overload, we relaxed at a nearby Starbucks to figure out where to go next.  My husband had researched an area he wanted to check out, a city area called Taito, which has a few districts; Ueno and Yanaka that he heard were fun. So we hopped the train for Ueno! We got out of the train and walked straight to this area of called Yanaka.  This town has the most old world Tokyo style buildings still standing, spared from the bombings.  It is a tourist stop as they now call themselves the cat sanctuary because of the strays in the area…which I saw none.  haha I did however grab a lot of fun souvenirs for my kids.  It was a sweet area to walk through and shop around.

We left that area to walk a bit aimlessly around, with the mobile phone it made it easier, because this is something we like to do when we are away.  We like to stumble upon local places or people to see how it is off the tourist paths.  This day did not disappoint.  We ended up on this great road where we found a vintage shop chock full of the coolest Japanese and American artifacts.  After this, we trekked down the road where we stumbled upon a stretch of street that had a collection of shrines that were scattered away in the most perfect settings.  We counted about 15 shrines and cemeteries in all!

We had walked a ton so far, but it wasn’t over yet!  I should mention that Tokyo doesn’t have a lot of resting places, like there are not a ton of places you’ll see a bench.  It’s almost like they don’t want people to loiter around.  Which I understand with almost 10 million people in the city, it could get overwhelming.  So if you decide to take a trip to Tokyo, or Japan really, wear sensible shoes and rest anywhere you see a seat because even their parks have like a bench or none per quarter mile. 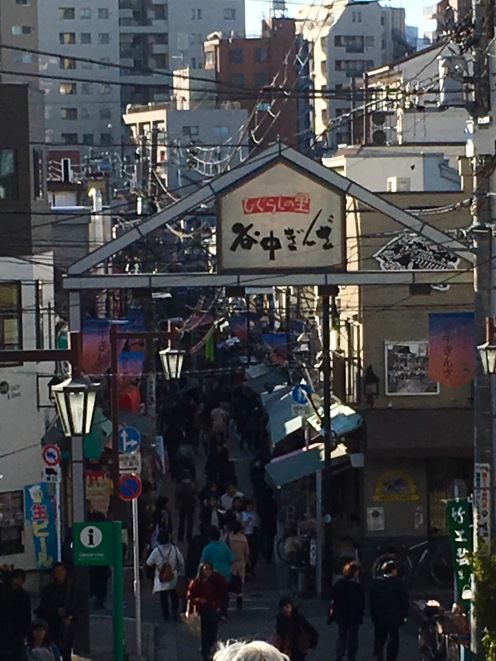 Yanaka- one of the few cities that survived the bombings.

It is now advertised at the cat sanctuary city 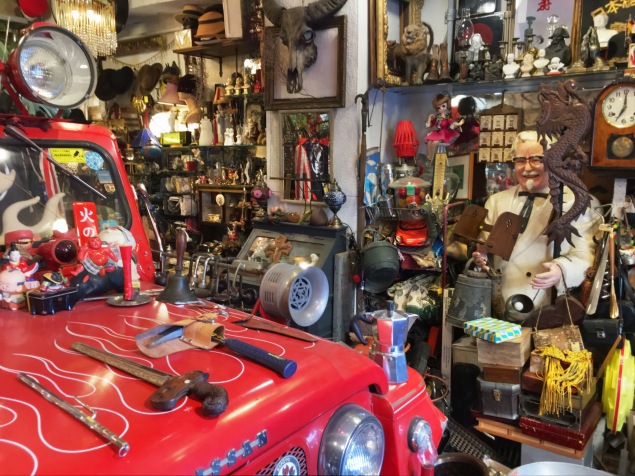 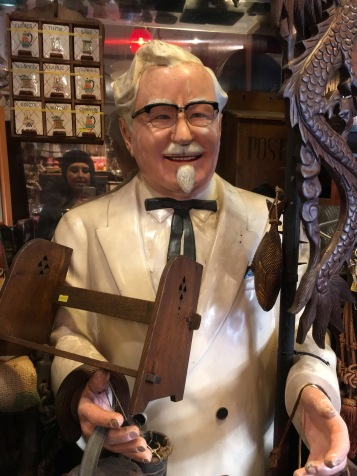 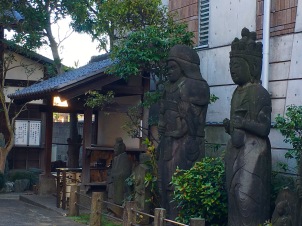 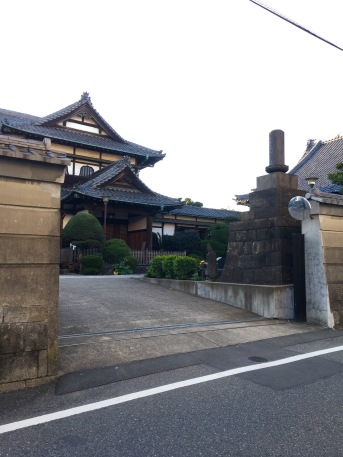 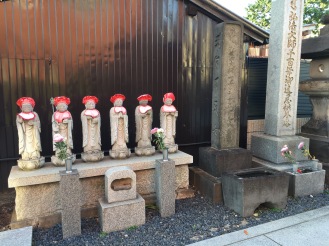 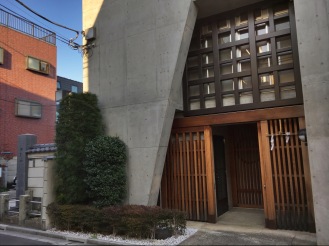 Details of the walls of a cemetary

Then we walked further along and saw on the map that the Ueno public garden/park was not terribly far.  We decided to make our way there.  It is a large park peppered with trees, landmarks and water features.  It was beautiful.  It is the well-known park for the cherry blossoms.  We had a great time walking through the paths holding hands. Seeing all the foliage.  We saw some unusual birds and talked (well I did with gestures) to an elderly couple who wanted to talk to me. It is funny that even with a major language barrier two people can speak (AND MAKE A JOKE) without knowing the other’s language. It was a nice way to spend the evening.

And we didn’t stop to rest, so the walking wasn’t over! 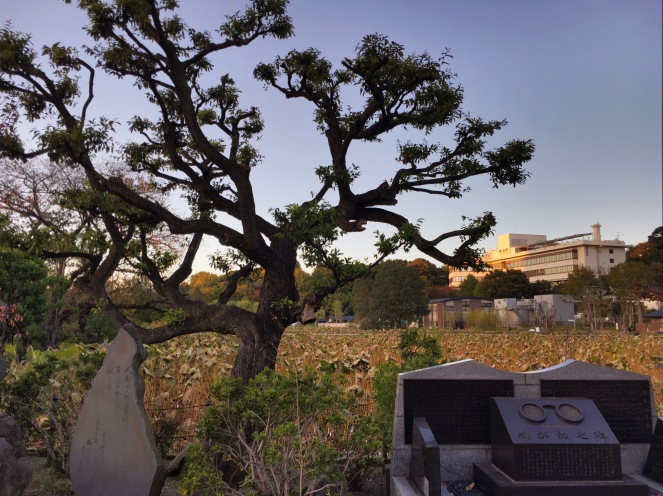 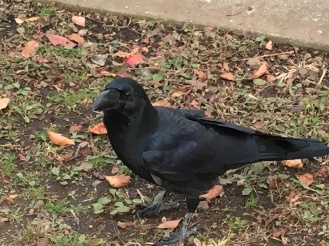 this bird was in love with me, wouldn’t leave me alone 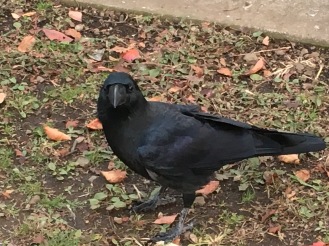 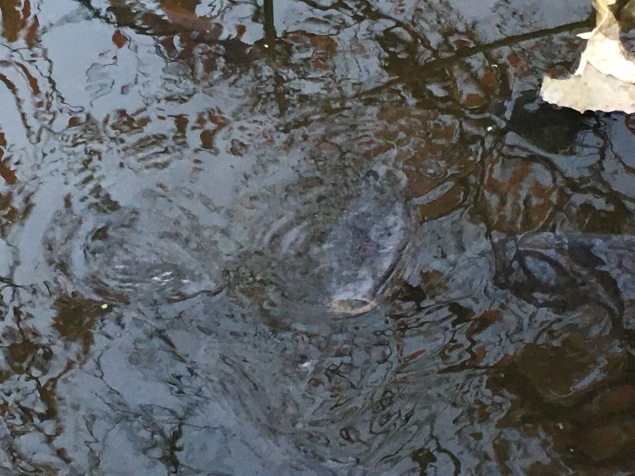 The past and modern city

We left the park right about sundown, so we headed to the Ameyoko market street.  Another fun district that has shopping, restaurants and just so many people!  The shopping was good but the people watching was pretty spectacular.  Tokyo is such an amazing place.  The sights. The foods. The people.  They have this wonderful way that they carry themselves, it’s like they have a lot of pride, but are very humble.  I don’t know how else to describe the feeling they give me except that I see them being a very humble and honorable culture. They are a quiet, hardworking people. So respectful of each other and to outsiders like us. It’s quite wonderful.

We finally were hungry so we ended up eating at a tendon place we looked up. Tendon is a tempura rice bowl…which is so good.  Yum.  We ended the night with walking around the city more, then headed back to the hotel for some relaxing and for me sleep! haha.  We clocked over 20,000 steps, so we were beat and needed the rest! 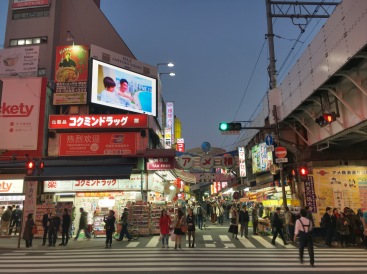 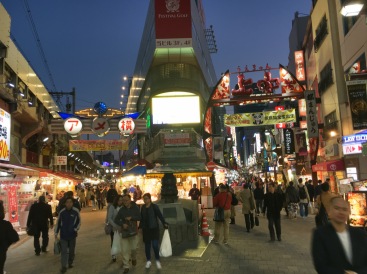 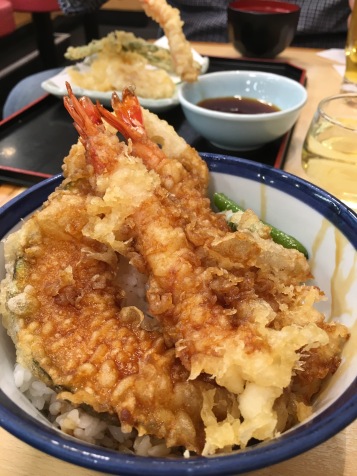 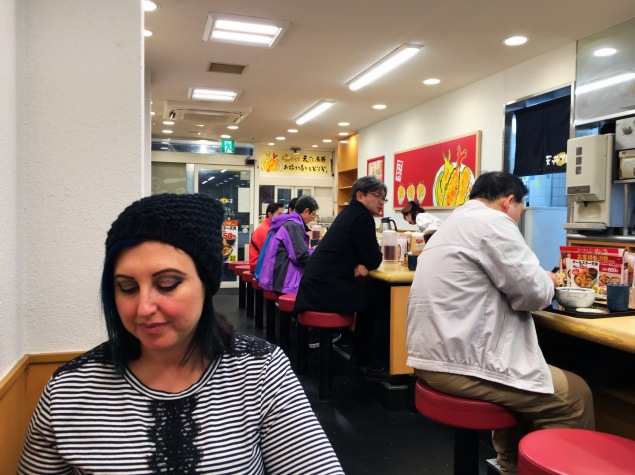